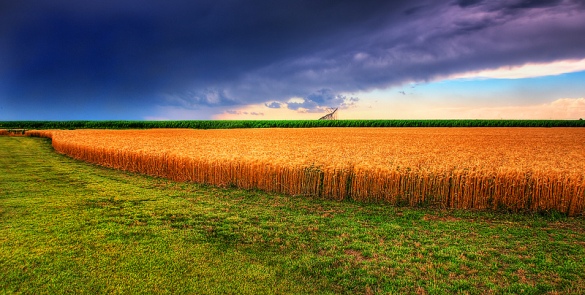 Every so often someone writes about how this or that region is going to collapse. Today we get a perspective on why agriculture will collapse in the Great Plains:

The seed, it turned out, was organic, as were all of Teske’s crops — though he was quick to clarify that this was “not just for moral reasons.” On the contrary, organic farming seemed to him the only sensible option left. Decades of innovation had turned conventional farming into such an expensive and technical proposition that it was hopeless for anyone but agribusiness conglomerates to attempt it. This, he said, was the real cause of depopulation. Modern technology made it possible, and more or less obligatory, for a single owner to work fifty times as much land. So neighbors got to buying out neighbors, and then were bought out themselves. The only way forward, Teske figured, was to reject all those modern innovations, at which point you were basically “organic.”…

Sprawling beneath eight states and more than 100 million acres, the Ogallala Aquifer is the kind of hydrological behemoth that lends itself to rhapsody and hubris. Ancient, epic, apparently endless, it is the largest subterranean water supply in the country, with an estimated capacity of a million-billion gallons, providing nearly a third of all American groundwater irrigation. If the aquifer were somehow raised to the surface, it would cover a larger area than any freshwater lake on Earth — by a factor of five.

Within a decade thousands of wells were drilled, creating a spike in productivity as unprecedented as it was unsustainable. Land that had been marginal became dependable; land that was dependable became bountiful. Even as the U.S. population surged, with soldiers returning and babies booming, the output of the plains rose fast enough to meet and exceed demand…Then, during the early 1990s, farmers throughout the Great Plains began to notice a decline in their wells. Irrigation systems from the Dakotas to Texas dipped, and, in some places, have been abandoned entirely…None of which, he went on, is likely to come back. For complex reasons involving wind, weather, and soil composition, the Ogallala does not recharge in the way one might expect. In fact, of the eight states above the aquifer, only Nebraska, with its sandhill dunes, is permeable enough to contribute any serious replenishment…

The farmers we stopped to talk with seemed to break his heart more each day. On a 12,000-acre plantation near Weskan, Kansas, we stood inside a cavernous warehouse of gleaming tractors and combines while the owner chattered and Teske interjected questions about loan terms and well output. He nodded gravely at the answers and chomped on the stub of his cigar until, as we headed down the driveway, his face collapsed and he moaned, “That poor bastard can’t even see the cliff he’s going off.”

One of the major ecological problems in the country – in the world – is the drainage of aquifers and dwindling water supply. It actually shocks me how little news it gets. Read the article, it’s absolutely great writing and had me gripped throughout the long, long article.