It’s the end of the month, so time for little thoughts on everything I’ve read. 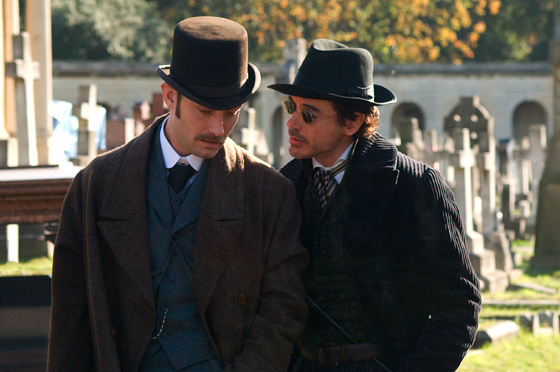 This movie is everything you’d expect from Guy Ritchie meets Sherlock Holmes, headed by Robert Downey, Jr. The dialogue is witty, the scenes are clever, and the action is impressive. Robert Downey, Jr. managed to seem both his usual self – a Tony Stark of the past – while picking up little Holmesian tics that captured a lot of the classic character. Jude Law is classic Watson and really lives up to his character.

Is it a great movie? No, but it doesn’t try to be. Its plot doesn’t make much sense at all, but it never dwells on that unfortunate fact, jumping frenetically from one captivating scene to the next, connected by loose threads. Several minor characters – such as Watson’s fiancee – are obvious throwaways. And the movie felt light – you never were afraid in any manor for any of the characters lives, or of any negative consequences at all.

One last point – I think we’re getting to the saturation point with a lot of CGI. The physics just looks wrong a lot of the time; I see a scene and it reminds me of other movies, not the real world. I wish they wouldn’t rely on it so much…

Bad Guy
The title really tells it all – this film is about a Bad Guy. The plot is fairly simple. Guy likes girl, girl doesn’t like guy, guy forces girl to become a prostitute, hiding in a place where he can 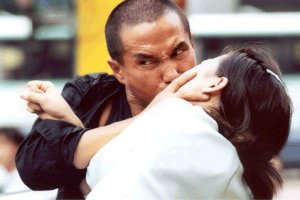 observe her humiliation. From there, the girl can slowly fall into love/obsession/Stockholm Syndrome. The movie even somehow manages to be more misogynistic than it sounds.

It does have some redeeming features beyond its sometimes nonsensical plot. The acting was extremely good, especially from the eponymous Bad Guy. The directing was spot on, and made what was an otherwise throw-away movie not a waste of time. For all that I said against the movie, I somewhat enjoyed watching it.

Visioneers
Zach Galfianikis plays a corporate cog in this dystopian homage to Brazil. Here, a near-future setting presents us with a world where everyone is a drone at the Jeffers corporation. There’s an unfortunate rash of explosions – yes, literal explosions – from the most frustrated employees and society members. These are the ones who realize there is something wrong, who dream but find there’s nothing to do and so – they explode. Meanwhile, most people recognize this hole in their lives, filling it with consumer goods and self-help books. 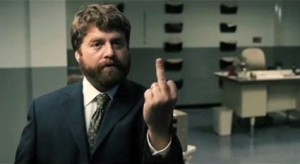 OK, you think ten minutes into the film, I’ve seen this idea before countless times. What does this movie add? Uhhh…Galfianikis is sometimes really funny? Really, either the movie is so high-concept comedy that it’s mostly over my head, or it’s too straight-faced to be “funny”. Sure there are amusing scenes, but it goes nowhere. The real problem is that the overall message is incoherent, or insubstantial, or incomplete, or something, but it’s certainly not profound or interesting. There are moments where it seems like it’s about to veer towards something good – such as the scenes with the brother and his dream of pole vaulting – but ultimately the whole thing is fairly unrewarding.

There are some highlights. Zach Galfianikis does a pretty good job, though he seemed to underact a bit through the latter half of the film. The film actually explicitly rejects the ‘hippy solution’ to the conundrum (though it does seem to have romantic visions of agrarian hipsterism), and instead focuses on looking to the future and, well, dreaming a better life as solutions to society’s ills. Except, of course, for a better life in corporate culture which the movie casts as shallow. Overall, though, I was bored and dissappointed.

Up In The Air
George Clooney is always smug. Always. Luckily, he managed to contain it in this movie, although it does come bubbling out on occasions. But hey, he’s George Clooney; if you were him, you’d probably be pretty smug, too! At any rate, it doesn’t detract here.

Up In The Air follows Ryan Bingham, a man whose job is to fire people for managers too 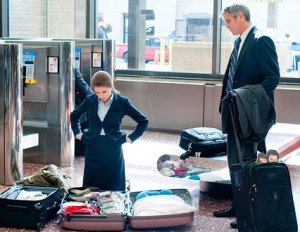 chickenshit to do it themselves. The movie actually uses real people who were recently laid off in the majority of the scenes, which adds a very cutting touch to the whole thing. Bingham, who travels all but about forty days out of the year, has no stable interpersonal relationships. He’s confronted with this when a young business-school graduate proposes to cut costs by firing people over the internet! Bingham, obviously, doesn’t like this and he forces her to travel the country firing people with him so she can understand what actually happens to these beheaded employees.

Obviously, the movie is a bit corny. It’s not too cloying, though, and even manages to come in handy when a plot twist appears which would otherwise be instantly foreseeable. Other than that, the script is tight and funny, with uniformly excellent acting from the main cast. The timing of the movie, what with the economy and all, combined with the use of people actually laid off from work adds a certain immediacy and power to the movie. Unfortunately, the general predictability made it feel a bit light and the occasional mood of inconsequentiality of the firings felt a bit too easy; this movie could have been so much more. 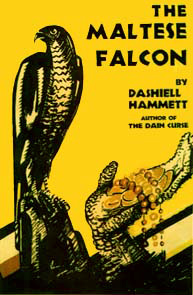 one that I really like. But I’m on a Dashiell Hammett kick, so I read the book. It turns out the movie is a pretty faithful reproduction of the book, so much so that I was remembering the words from the movie when I was reading the book. Anyway, the plot is your typical noir: detective gets hired by a mysterious lady to tail someone, getting him involved in murder, intrigue and more. The protagonist is a slightly-crazy man who does whatever he wants, and gets away with it. He bullies informants, plays with the police, and does swell with the ladies.

Dashiell Hammett books tend to contain a lot of clever repartee, but sadly this one is an exception. Missing were the lines that make you mentally take note so you can use them in the future. The plot also felt a bit jumbled and uninteresting – though better than the Dain Curse. In the end, the book is okay, though it feels like Hammett was writing by rote rather than inspiration. The completist should of course read it, but you’re better off reading Red Harvest or The Thin Man if you’re only going to read one of his books.

The Russian Girl
This book was sitting sadly on a much-picked-over shelf at a going out of business sale. Perhaps that should have been my first clue. But hey, I’d heard the name Kingsley Amis, and I 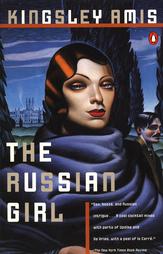 thought he was supposed to be famous and a good writer! How bad could it be?

Well, it wasn’t bad, it was simply mediocre and boring. This tale of a British professor of Russian studies runs into a terrible Russian poetess who wants to use political pressure to get her swindler brother out of jail. Of course, the professor falls for the woman and agrees to help her, despite her cringeworthy poetry. It all sounds way more interesting than it actually is; the plot is fairly uninteresting and slow. In fact, it’s hard to find anything particularly good to say about it – the writing was perfunctory, the characterization far from clever. Don’t bother with this one.

The Dying Earth and Eyes of the Overworld 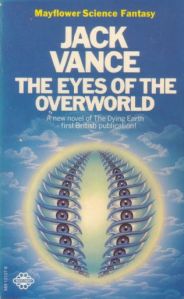 Having read uncountable fantasy novels as a child, I cannot fathom how I possibly missed the Jack Vance canon. Beyond being important to the whole genre of fantasy, this writing is amazing. The writing is some of the most enrapturing you will find. In a way, Vance reminds me of a more baroque Borges; but only kind of. Every page is full of delights. Here is a random paragraph:

Concealing his dissatisfaction, Cugel asked further questions, but the creatures were artless and unable to maintain their attention upon any single matter. As Cugel listened, they discussed the flow of the ocean, the flavor of pearl, the elusive disposition of a certain sea-creature they had noted the day previously. After a few minutes Cugel once more turned the conversation to Slaye and the amulet, but again the shell-creatures were vague, almost childlike in the incosequence of their talk. They seemed to forget Cugel, and, dipping their fingers in the water, drew pallid threads from the drops. Certain conches and whelks had aroused their disapproval through impudence, and they discussed a great urn lying on the off-shore seabottom.

Well, I like it at least. In any event, the writing is phenomenal and the stories interesting. The characters are amoral and complex, not your typical goody two-shoes. Perhaps the only negative bout the books is the plotting. Vance seems unable to create a story longer than forty pages. While The Dying Earth is explicitly a collection of short stories, Eyes of the Overworld is not. Eyes of the Overworld is the story of a man returning home through bizarre northern lands, and it has a certain Gulliver’s Travels quality to it. Really, though, these are classics that everyone should read. 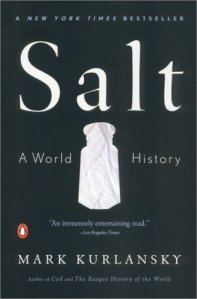 Salt is a book about the history of salt: its discovery, excavation, uses, and general history. It is written chronologically, allowing the reader to pass from the oldest discovered methods for extracting salt up to the modern discovery that salt is actually ubiquitous. Innovations and refinement techniques, recipes, it has everything the layperson could want to know.

The book is divided into three sections, generally historical. The first is quite interesting; you learn about ancient techniques and really gain an appreciation for how little changed in the world for so long. You also learn some cool things such as about the salt El Dorado, Taghaza, and that the ancient Chinese used natural gas to mine! There’s also a lot about commodities trading in there. Ancient producers found it more profitable to get into the value-added business, and were likely to sell salted goods rather than salt itself. The sections on ancient commodities trading and inventions? Awesome!

The middle section was kind of a bust. I wasn’t really interested in reading recipe after ancient recipe that included salt, and the focus on Western European and colonial American history was a little repetitive and bland. It only picked up a little towards the middle of the third section, when they got to the modern science of ______ (hydrolisis? separating elements and evaporators!). The book would have been better served with more non-Western history, if not only because China was really rocking the whole concept of salt extraction. What was India doing that whole time? Africa? The Middle East? I came away with no clue. He also massively overstates the importance of salt in history. Look, I know it was important, but he makes it seem like it was the cause of every major event in Western history. Just because it was there at the same time, doesn’t mean it was the most important actor! But maybe he was just being subtle.

OK, OK, so I really just skimmed this book. It’s a neuroscience book explaining the social neuroscience circa 2002. They explain the role of different brain areas such as prefrontal cortex in social behaviors, and the suspected role of neurotransmitters. Unfortunately, it was written at a fairly low level, leaving paragraph after paragraph of dead uninteresting weight. They also tried to do too much: the topics were diffuse and felt like they were going everywhere. Excising half the book and a little more focus would have gone a long, long way.